"You're too young, my son and you cannot know that there was once a country where...

1) People were not allowed to freely meet with other people
2) Private Business was shut and huge fines were in place for those who dared open their shop
3) Only the Public Sector was secure
4) People were not allowed to leave their country without the written permission of the Government
5) Public gatherings were prohibited, for fear of angry demonstration against Our Dear Leader. The Police were out looking for potential subversive elements to crack them down
6) Churches were shut, you could not pray or publicly practice your religious beliefs, as the Government didn't like that
7) Christmas and Easter were officially banned and considered as old-fashioned superstitions
8) There were huge queues to enter the shops, and often the shops were half-empty...."
"Yes, I know!  I studied that at school. Was it the Soviet Union in the 1930s, right?"
"No son, it was the UK in the 2020s."
on March 23, 2021 No comments:

DO NOT FALL INTO THE TRAP

You only have one family and whatever happens I think we all know that we have to be loyal to them and try to make things work.  When Harry and Meghan came out this week complaining about The British Royals it was a sad day in our history.  We learnt nothing new.  Meghan's treatment of her Father was not a necessity either,  or her previous husband. Celebrity and being Royal are not the same thing. You cannot be political when you are Royal.

We all crowded the streets in 2018 to watch the couple get married, an actress from Suits and our cheeky Prince, we all hoped its would not pan out as we suspected it might, we honestly wanted them to succeed.  Two and half years later they behave as their critics said they might. For Meghan  to accuse the whole Royal Family of racism she confirms the woke victim narrative of the moment.  There was no proof except her word which is proving questionable. There is no gratitude to the people of Great Britain. Why should we pay for an ex-Prince and his wife?  As Meghan accuses the Royals let's have a name? What was the context?.

I was saddened that nobody helped her for Post Natal Depression/Depression having suffered from it myself. Tragic she could not find solace. With Harry's thirty million from Diana surely she could get help? Harry's family and public so loved him how could she choose this moment to spill her dirty washing? The Queen is dealing with her husband, the Pandemic and her country. The Monarchy is the backbone of our country and without actual facts of racism, we should put Meghan's comments on the back burner. We should listen and watch. We should not be victims. Treat other people as you wish to be treated.  We should forgive and be kind. 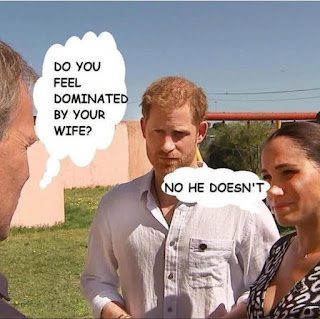 Oprah is falling into their trap. Oprah is a billionaire and proves that self improvement works. Why would she support this? Oprah is the richest black woman in the world. Her blackness did not stop her success.  We love this woman. Why would she have fallen for this?  Why would she say black women cannot succeed? Why is Oprah so destructive, she gave women from all walks of life and colour hope. I for one never noticed her colour I noticed her thirst for knowledge. She was not bitter or twisted and interviewed a huge variety of interesting people. Yesterday we found out the reason why,  Oprah is working with Meghan on a documentary.

Meghan was cruel to Kate last night and with her eyes again fluttering she confirmed to us who she really was. Meghan was a television actress who gave a five star performance on her eternal misery. Harry followed. As for racism and white privilege it was clearly shown here. It is easy to use the race card and so predictable. The English started to question them when they gave us lectures on climate change yet flew on Private Planes. As for Meghan she should be ashamed of her lies.  It is well documented that she was after Harry before she even met him. By the way at the time who could blame her. Everything is fully written up for us to make our own decisions.

The Memes that are flowing round the world say it all. Meghan did not know Oprah at her Wedding and clearly the only winner was the latter. Harry looked downtrodden and Meghan tried her best to make us care. As I watched with my bubble, the debacle, nobody paid attention, we all talked throughout the dull and self indulgent interview.  We all agreed it was tiring and tired.

As her Majesty said "Recollections may vary"