JUST DO IT. NEVER LIMIT YOURSELF

|f you can say what you are not, then you can say what you are. As everybody pays one or another for their Titles and have done for centuries I decided to do the same. It is a novelty item that everybody can enjoy. I decided to buy The Title The Countess from Elite Titles as I can do as I like, and I want the Title I liked most. It is available for everybody and so I gave it to my friends Barrington and Inesa De La Roche, Kay Saatchi and Fizzy Barclay, too as a present. It is legally binding should you wish it to be and although a considered purchase for some in reach of most. I don't think it looks cheap it looks clever.  Of course, it's nice to be given one by the Queen, but when I met her she was not dishing out any awards that afternoon, but she did notice me when I waved up to her in the box. In any case, she cannot change immigration or Brexit. I, therefore, needed to buy my own fairy gossamer wings. At least, I did not have to procure this from a horizontal position, money laundering or indeed political favours.  All  I had to do was give the company selling them the long number on the card, which is no difference if it is Coutts or  HSBC.
When I wanted to be a photographer I acted the part and hey ho I was a photographer creating a book with Italian Vogue called "British Artists at Work" and meeting the most illustrious artists in Great Britain. When I wanted to be a poet I wrote "Cloak and Dagger Butterfly", when I wanted to act I went to RADA and when I wanted to learn Tarot Cards I went to a witch who says to this day I am the best reader in London other than her.  When I wanted to be a film maker I made "The Gun The Cake and The Butterfly" and got 7 awards for it. The natural conclusion from this is what you want to be is decided by you. None of us is static until the box. I said to my first husband I did not want to be a Battersea housewife I wanted to be a Belgravia house and the next minute I am living in Chester Square. Never limit yourself as there are plenty of people out there who will do that to you anyway. So now I am The Countess Amanda Eliasch! All is achievable with the right attitude and guts. Just go for it after all everything is an illusion so just try and pick the right one. 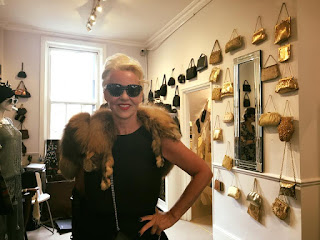