Unofficial Review by The Missfits.

THE BULLYING OF PRESIDENT DONALD J TRUMP GUARANTEED HIS SUCCESS

I was raped by my Grandmother's gardener when I was seven. I looked in the mirror, I thought I needed to hide, the solution was to get fat, the village was a dangerous place for a blond. For the next ten years, hiding at the "bottom" of the class, everybody left you alone there. I thought very strategically. To be fourth from "bottom" of the top stream the family would think I was clever enough but lazy. I did not want to draw attention to long blond plaits and dug my fingers into my face creating welts so I was spotty. I wanted to be left in peace. It kept me safe, playing with ponies having fun with friends. When I was 14 my best friend told the rest of the class that I was the prettiest and would definitely be the prettiest at 40, I went into panic mode. I hid again with another 20 inches of lard.  In my final year, I took my exams. I didn't care,  I was on this planet for better times. I received my O-level exam results back and got one B in English Literature and 10 E's. I filled all the E's turning them into B's and went proudly to my Mother. She went to the teachers, my lie was overturned. Back to school, this time to a crammer, where you learn everything in one term. "Bullying" Bullied to be clever, pretty, intelligent and fun. That's the point.  I was at boarding school from the age of 5, where they tortured me with a plastic whip. It was fine. Now I look back it made me stronger and more determined. I would dream of castles whilst my girlfriends would dream of owning the local pub. 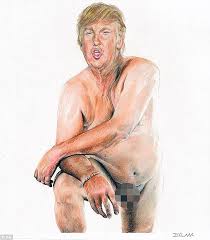 Why I say this is that during this election, The Liberal Left Democrats have been guilty of unforgivable bullying which did not bring out the best in Donald Trump. So much for spirituality, yoga and their fake gurus or using diplomacy. Bullying  Donald J Trump guaranteed his success, He was bullied by actors, stars, politicians. Hollywood.  Everybody said he could not do it including Barrack Obama. I won't mention them they are out of fashion now. That is except a small number of followers like Alex Jones and a huge supportive social media, representing the real people. I knew he would. Trump would answer back, he would twitter and spin, but I could see him the small boy and he was hurt. This is a man who has everything perfect. Perfectly beautiful wives in perfect clothes,  perfect children, perfect grandchildren with perfectly neatly organized lives. Nobody on drugs or drink, squeaky clean. The only thing he could not have was credibility with the Hollywood narrow-minded elite, the Illuminati, The New World Order. They ridiculed him saying he would never make it, he was the "Straw Man sent to save Clinton with an orange face"  How stupid they all were. He rose to the occasion against all odds, ridicule, and bullying. Hollywood, the bank's, Artists,  everyone talked badly, about him and enjoyed it too. Their small limited minds will diminish with every signature.  President Donald J Trump, good on you, you made it. I know you will do well, that is if they do not kill you first.  Now the left is using The Oscar's to march and discuss Climate Change. This makes me really furious. Nobody cared that Obama dropped 26,000 bombs in the Middle East and the devastation to the planet that caused? Where is the moral value?
My word of advice is to keep safe, they love to murder. Mr. Trump, your Inauguration was incredible, moving and yes it the audience full.  Yes, the photographs are taken at different times. Just a word of advice put Soros, Streep, and Madonna in "Coventry" in the corner.  Show them you are the success that they have all been waiting for and most of all enjoy the position you have achieved and do your best.
A note to all haters, you have only yourselves to blame.

"You want one to have conformist beliefs, I like to be analytical and individual. I do not sadly believe in bolting the gate after the horse has fled, sadly Hillary's currency is now Confederate Bonds. President Trump was fortunate to be up against Hillary at the time because she was the only person who gave him credibility. He made her look like a serious contender which she wasn't. She thought she was in a Democracy, she was in The Federal State of America. One more thing STOP using women's rights when this is not about that but about getting rid of Trump sorry you don't like his haircut. The really clever women know this and see through it. Please stop it. Instead, do something positive, rebuild rethink and choose somebody who is clean without a reputation. Obama and Clinton managed to lose and destroy the Democrat's in both houses and work needs to be done".

I have been doing my best dressed list since 2007 which is now ten years ago. Congratulations to my very stylish friends. Getting dressed is one of the most fun adventures you can do in life. I personally prefer a uniform but some of my friends are truly creative like Inesa, Lady Gaga and Rushka.
It feels light relief to discuss clothes instead of politics which have been so aggressively fought  in the last few weeks. I have added my favourite men too, I love the way Anderson Cooper dresses and Roger Stone and I love the style of George Blodwell.

How To Encrypt/Decrypt Text In Microsoft Word

Piers Morgan on his friend Donald Trump, tells snowflake liberals to get...

FROM FRUMP TO TRUMP

With fake news being highlighted everywhere, truth is lurking and hiding in dark corners, I decided to be prudent for a moment and think.  Whenever someone says "Don't look", I feel they are trying to divert my attention,  I automatically have another look and another, just to confirm what I originally thought.
I have been down the rabbit hole of fake news and whilst some stories could be exaggerated, there is the saying "Where there is smoke there is fire" Take for example the possible insurance scam of The Titanic? A boat swap with the sister boat, The Olympic?  I will leave you to go down that hole.
It is a fact that the abduction of children and sex has been used to control people for many years, the MK Ultra program has been well documented within the world of The Illuminati, not everything should be discounted as a conspiracy, it is and was apparently used to cover up and control the misdemeanors of the elite so Pizzagate could be true.
However distasteful, it is a good idea to have your eyes open. I was talking about this subject several days ago and a perfectly normal gay man said he had been involved in just such a program and his boyfriend ended up dying in very strange circumstances.  These people do not look weird, they  mingle with us in very normal ways.
I also argued the case of freedom of choice and abortions, which for me is also a problem. 250 million babies are aborted worldwide each year. This is a genocide, women should be sensible and use contraception. Obviously,  in times of war, this may be impossible.

This week,  we were lectured by Hollywood, in particular, Meryl Streep.  We were told how to feel and how to think about Donald J Trump which only makes me more determined to support him. Discrimination towards Conservatives in this town is wrist-slittingly predictable. I am not interested in being told that I am bad if I approve of him.  To be rude continually,  is dreary. Their opinion was ignored and next week he will be Inaugurated unless he is assassinated. The lame ugly jokes were tiresome and their dresses lacked panache because of it.  There is something very boring about this year's Golden Globes, despite the optimism of the film  LALA Land, it was the endless negativity about the future President without any consideration that it could be untrue and that it is actually bad manners to be such an appallingly bad sport.  It was absurd when The Middle East is wrecked, 5 million refugees are everywhere,  all is blamed on Donald J Trump, who as yet has not held office.  Also flying around was the hacking blamed on Putin and not Julien Assange the real curator of Wikileaks.
Heavens. So much for political correctness. Obama is and was in power, lest we forget, and it was Hillary Clinton's  Foreign Policy and the will of the Liberal left wing which has often caused such hardship.

Meryl Streep  became ugly and distorted.  Her lifetime appeal went up in smoke as I made up my mind to never watch a film with her in it ever again.  We should also remember that Meryl was wearing an expensive over jeweled, ugly couture dress/jacket, her makeup was done and her hair too, all at great cost.  She is true champagne socialist like the rest of her associates.  I am tired of listening to badly thought out arguments about what Trump is going to achieve when he has not actually in office yet. We gave Obama a chance and what a lame duck he proved to be, charming yes and ineffectual. Lest we forget the American's are 20 trillion in debt and America's reputation is in a mess around the world due to its endless bomb dropping and fighting wars. Obama is charming but, with a huge B.

Talking about clothes I also think Ivanka looks better dressed than most of the Globe nominees. Let's be honest The Trumps are mostly well dressed, intelligent and well spoken. Give them a break and a chance to rule. Trump is well loved by his employees and was voted legally into office, so enough is enough or the whole of America looks foolish and unintelligent.

I wish the future President of the United States of America great success against these out of date thinkers who only think about their own Estates and lifestyles.
I would love to say the actresses were well dressed and that their films interested me, but this year nothing did. The winners were predictable and quite frankly not good enough. C'est la vie. Corruption. The ugliness of propaganda just bored me to tears. Shame.