At the moment I have nothing to say of any relevance, or that is politically correct. On the contrary I feel like shutting my mouth and saying nought. The saying goes "When in doubt say nought" This sums up my feelings this week.

Frieze came and went and I fell in love with several pieces which until my house is sold, I can forget. I will need a further five thousand feet in order to place all my artwork, as the storage bills are mounting.  I adore collecting art. Frieze Masters was where my heart was and I had to escape and walk the length and breadth of Regents Park in order not to collect one more thing. The art world followed the Film World and I went to the last night of the London Film Festival, starring Brad Pitt in Fury. Definitely a boys film. 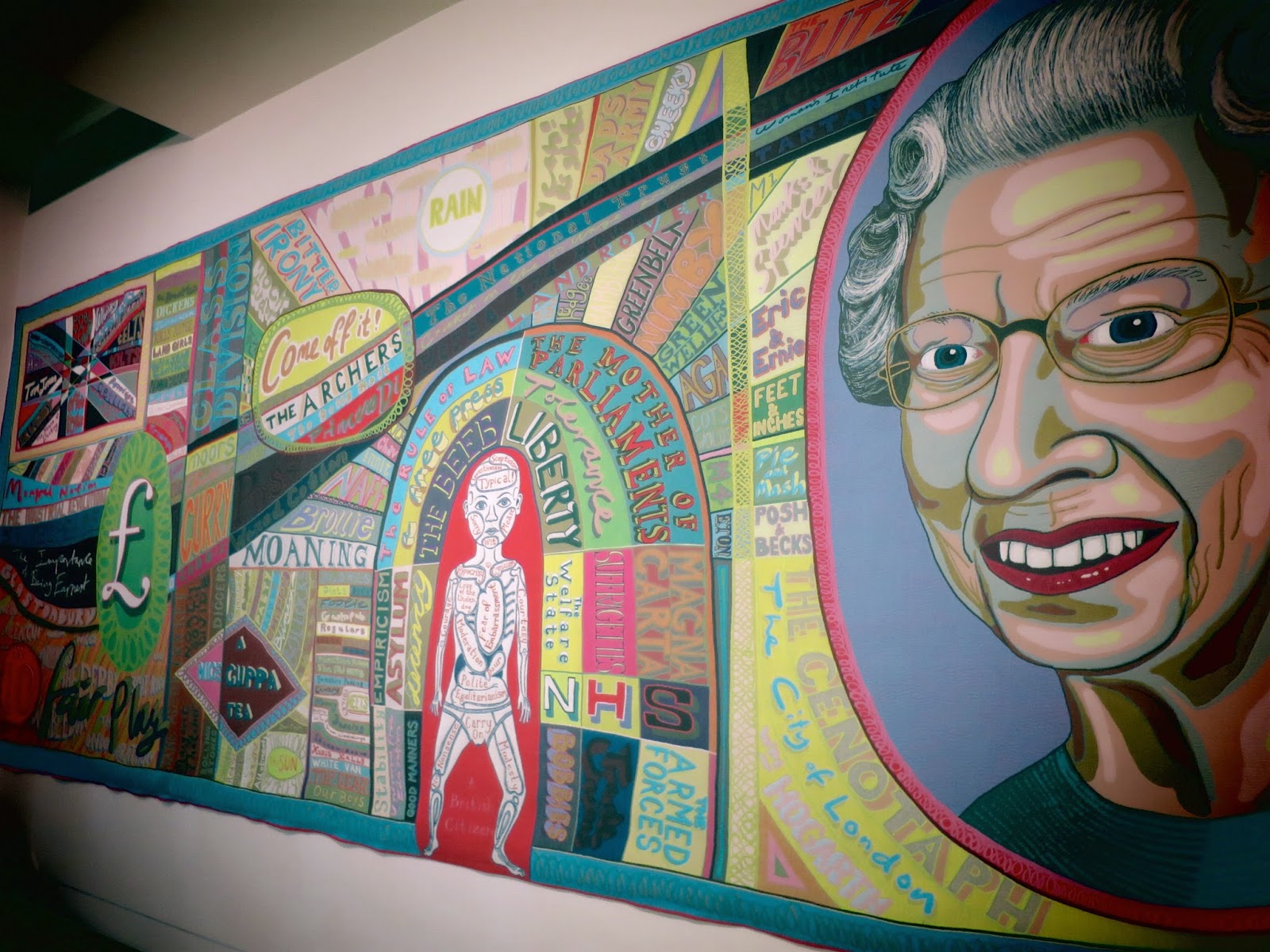 Luckily The National Portrait Gallery was at hand and I could enjoy Grayson Perry's new show "Who are you?" without putting my hand into my pocket. I totally fell in love with his images of real life stories in modern England. The mixed race, same sex marriage, with an adopted girl. The white girl who wants to become a Muslim.  The migrants, the religions.Using China, writing and tapestries, he has created lasting images of what Great Britain has become,  all neatly wrapped up in the safety of one large tapestry note. He questioned our need for the crass, showing people to be materialistic liars, yet he does it with humour and lashings colour. He is the genius in the art world of today. He is thought provoking, and I am happy to own a tiny mug he created when he first started. Yes I am his biggest fan. His art hung against the normality of other portraiture from another time which included interesting pieces and a fine example of Her Majesty The Queen. I met Grayson when I photographed him for my book, British Artists at Work which I created with Assouline and Franca Sozzani at Italian Vogue. His enjoyment of being a cross dresser is an art form in itself. 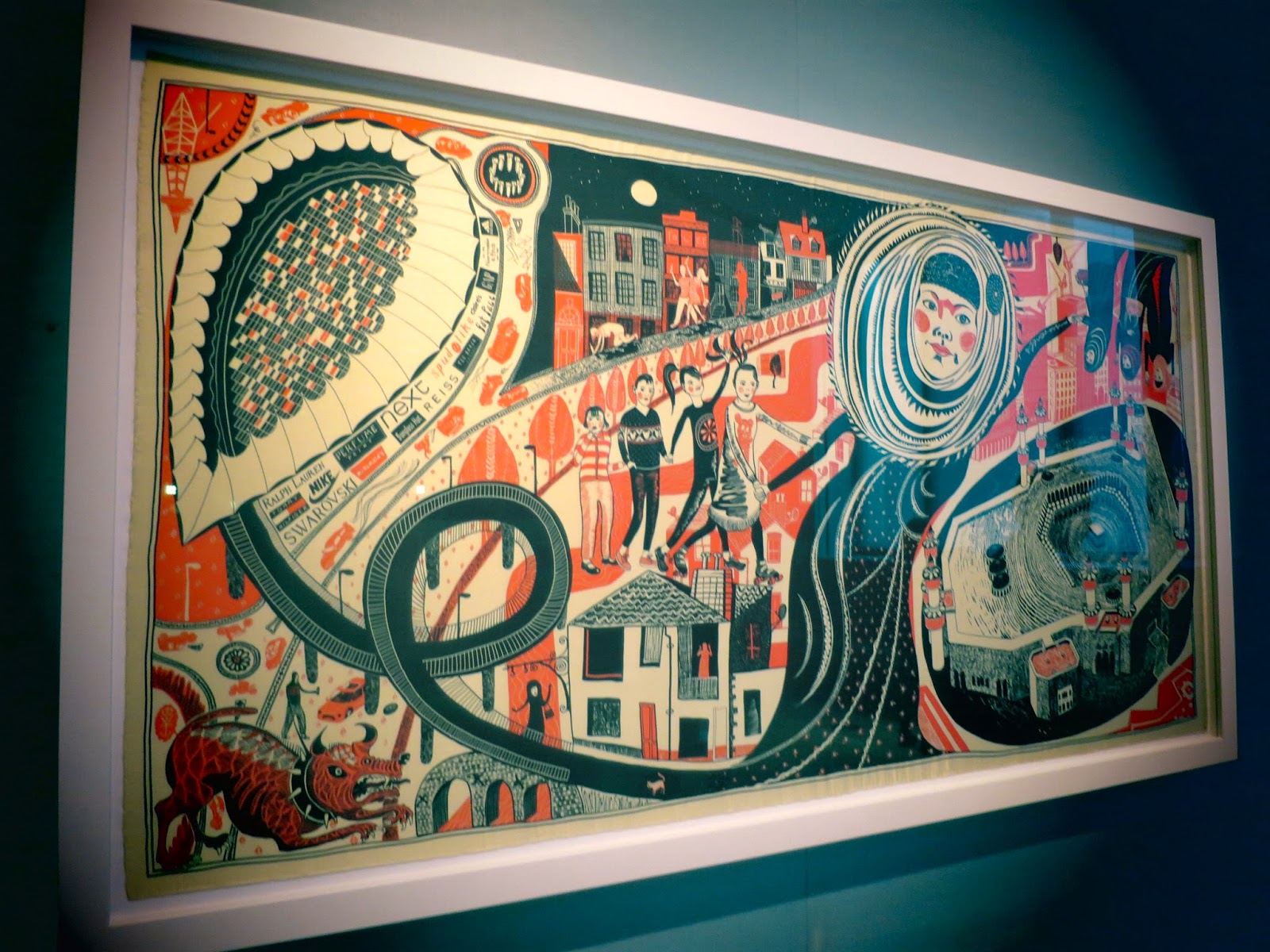 In the Sainsbury Wing, Rembrandt, The Late Works. The master of The Selfie,the lover of light and religion equally kept me thinking, Examining himself in different way. I could have spent all day in this wonderful Gallery. I ended up with the Tudors, the engineers, the war mongers and religious new order, A rainy day turned into one of the best days this year. He is not flattering and he doesn't care what people think. He is interested in thought obviously. 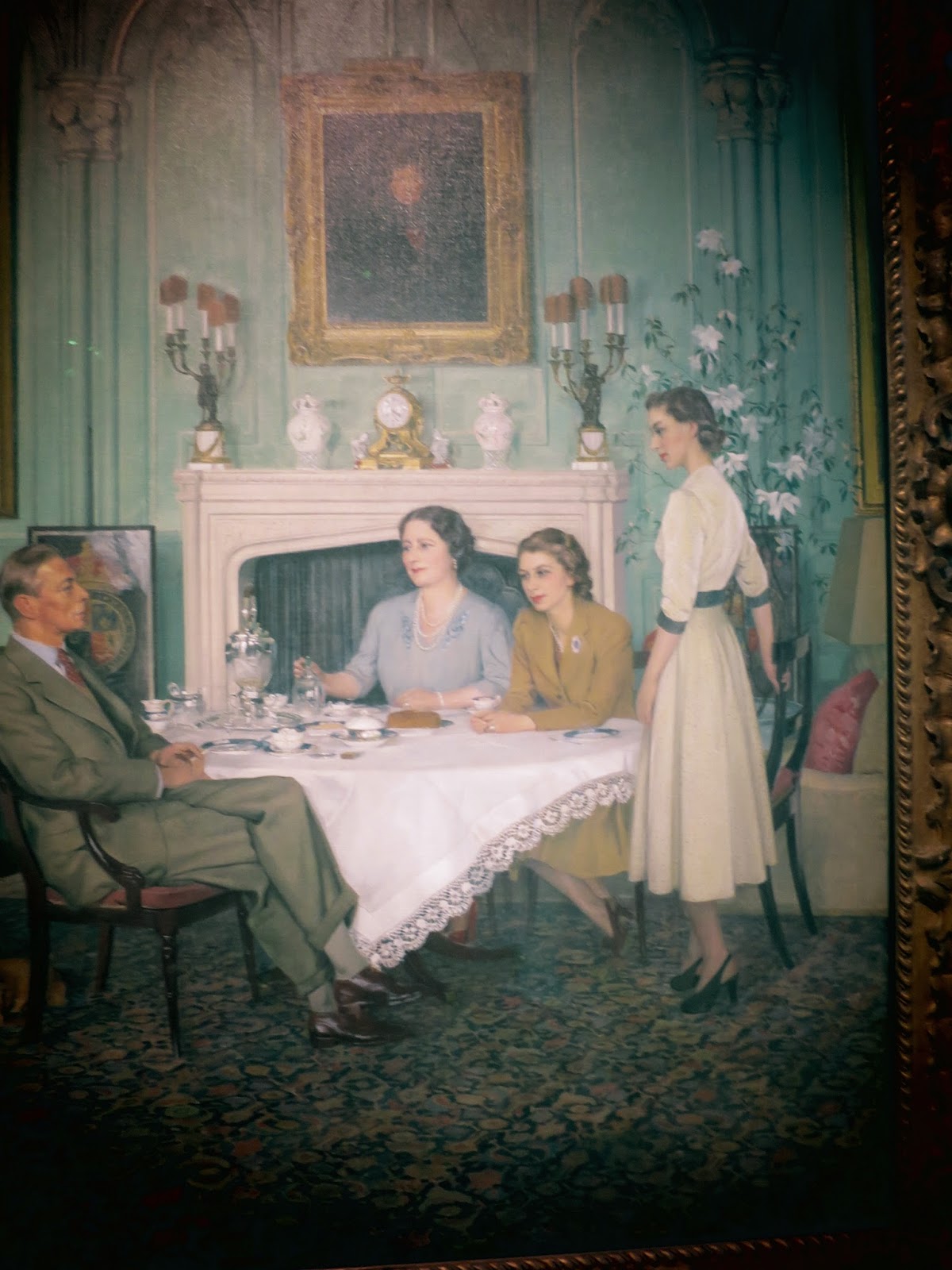 I arrived back home to find a dreary comment in one of the papers that I have said that it is tricky to find a house under ten million in Central London. Indeed?. What I meant was that the cost of a house in  the London property market increased at a tremendous rate. There is little to buy in central London under 10 million, if the journalists bothered to ask me, I would give them the data that I have collected of both sold and for sale houses. They tried to make a joke of something that is serious. They just have not done their due diligence, because if they had they would see I was right. Incidentally my house is not pink, I just have a pink sofa or two, it is white. Having had three offers in one month, I think, Grayson and I correct in thinking that there is huge amount of  migrants, both rich and poor.  The first street I bought in was Battersea, the house cost 28,000 pounds, it is now 3.5 million-12million. In Barnes and Richmond houses are between 2.5 million and 12 million. Central London, Chester Square is now 15 to 25 million and Cheyne Walk too. I think Grayson's work fits in with this entirely as does the words  of the band "The Last Internationale" reminding me of Patty Smith in her youth. Young vibrant and full of hopeful ideas which will soon change with their brand new shoes.
Of course there are smaller places as well, I am looking for a 4 bedroom house for my children and I.
on October 24, 2014 No comments:

What a violent and insane world we are all living in today?.
Terrorists and impatient young men all attracted by fearsome groups driven by lunacy. Chopping off five peoples heads are more of a challenge to watch than the risk of Ebola currently eating up the world, where to date about 3,000 people have lost their lives, less than war but so tragic.
Around this genocide, Fashion week kicked off in Paris, where, the collection that stood out was accompanied by Marc Quinn's Orchids,  Alexander McQueen with Sarah Burton at the helm is standing tall. Also Yohji Yamamota showed distressed imaginative clothing, a wedding dress falling apart.

Then Tracey Emin's show opened "The last big adventure" I hope it is not her last adventure. Drawings of her in the nude legs spread still erotic and shocking. Famous, winning an OBE, Tracey has become establishment with parties at Annabel's yet she retains her edge.  I was rather optimistic this week and assumed I could make her show and the British Film Institute's dinner all in one night.  Sponsored by IWC the watch company it was a very glamorous event. Mick Jagger, Christoph Waltz  and Emily Blunt were all there to support this charity to save film.  I spent a fun twenty minutes under a dining room table laughing with Tim Noble.
For further culture I entered the Anselm Kiefer's brilliant exhibition at The Royal Academy,  which tells us all about the circle of life, war, nature, dark, light, love and sex reminding us to be careful with all this violence.
Then I went to the Book of Mormon, the only thing interesting about the Mormon's is the sexiness of Donny Osmond.

What a diverse planet we live in?.

Young Chinese students  were fighting for their quality of life, and so on.
I walk in sunshine and except of Aljazeera live from Doha in my bedroom, I am in a pensive mood. I feel quiet. Yet The Vortex's lights are about to go up in Los Angeles starring Craig Bobby Young and I will have to come out of my happy dreamworld soon.
Child abuse is on the rise in Japan I listen. I watch police finding a girl dead and buried. What sort of world are we living in?
Is taking a selfie wrong at the Hajj?
Is UKIP terrifying or truly terrifyingly honest?
Or are they our future "truth?"