A SIMPLER GUIDE TO THE US ELECTION

Hillary Clinton, you will be voting for Open borders, Globalisation, corruption, higher taxes,  WAR, Wikileaks scandals. Bribes, Clinton Foundation, ladders of opportunity is how much you give to her, Gangsters, Clinton looting the treasury, last time she had to give back the china to The White House. She does not like religion. Crime and Bill in the next door office but we were sold down the river a long time ago. Terrible reputation, yes terrible, around the world. Chelsea has her hands in the piggy bank too. Look what Clinton's did with Haiti, her past reputation with Vincent Foster, 140 people disappeared, Benghazi, Whitewater, her trashing of others religion, 35,000 emails bleached. You will be on the hook. 20 trillion in debt. Upstate New York. Thirty years of failure. Bill Clinton was threatened with impeachment and disbarred for sexual harassment which they then framed Donald with. Hillary's poor health and suspected Parkinsons. Do you seriously want more of this? Hated by Haitians. Famous for drug laundering. Gangster activities. Corrupt Media and Supreme Court. Money stashed away instead of giving to charities. Left wing liberal  intellects love her. Propaganda. All her emails compromised by enemies of state. Time to tried, Madame.


THERE IS NO Obamacare.THIRD CHOICE.


Donald J. Trump offers the opportunity to make America great again, this is his great wish. Greater screening of immigrants, lower taxation, greater security, religious tolerance within the borders. A wall, corruption stopped. Hillary in Jail. Nationalism, building up the army. Had a clean reputation until Mainstream Media killed him. Beautiful well behaved children. popularity with poor America. Liberty, Donald is loved by the people. You have to make a choice. Charm, humor his own wealth. People love him.


Freedom. Corruption within the system exposed and imprisoned.
Main Stream Media exposed and shamed. Paid for his own campaign.
His supposed sexual harassment have now been proved that they were set up's by Clinton campaign.
Robust health a few pounds overweight. His own successful businesses well loved boss. Love of women. Improved schools and police. Anti-drugs, anti-booze.
Beautiful clean Whitehouse with a nice family. Well loved around the world.
on October 16, 2016 No comments:

There is something so stinky going on. So stinky. People really are blinded. Thank goodness for the brave people out there who say things as they are. Brave journalists at Infowars and Stefan Molyneaux, Hannity. Go for it. New York Times should be ashamed of writing such vitriolic rubbish and the Democratic party are over one way or another. In fact all politics as we know it today is finished and over. They are clearly worried about Trump and they should be, because he should be President. Remember Ronald Reegan?

No way I shall ever be "Compliant" even on my death bed. Deplorable is the way to go. The rest can rely on one thing and that it is Hillary Clinton who likes war, Her country sells America's weapons and she makes money on her backhanders. Hillary then hides this in her Foundation under bogus claims she does a lot for society yet does not help Haiti?  She has shown that it is she who has caused the mess in the Middle East. It was her murky foreign policy. She could have stopped it, she did not. These are facts. America makes a lot of cash manufacturing of missiles/guns, 35 billion a year the largest sales in the world and this was just in 2014 . WW111 is nearly here. "Of course" WIKILEAKS is Russian run. Give us a break, it is a small operation with one of its men locked up in an embassy. As they have a clean record of producing correct material you should read them.
If there is a war it will be you Hillary  Clinton who started it with Obama. We do have brains and we have always been awake.
I say go with the DEPLORABLE LECHER and REBEL DONALD TRUMP and be BRAVE. If he mucks up we will BE ALLOWED to  scream and shout.

It's okay for Bill Clinton to rape and commit crimes but not okay for Donald's locker room talk.  The truth is it's not great about either story but at least Donald's is all talk. Since when have you all been prudes, you are mostly up to no good yourselves.

On a positive intelligent note, it is you the people who should fight Globalisation, war, and the New World Order, which by the way is looking very old fashioned to me, most of the people who are heads of it are now over 70, ready for their old age. Hillary is sick and old and needs her medicine.  It is she, Hillary and her crony's who are racist and xenophobic, talking about blacks, Catholics and anyone that does not agree with her very old fashioned ideas, in fact, all the Liberals are. I have never heard so much intolerance in my life. It is you the Liberal/Democrats that are unkind. It is you who are critical. Enough. No more.
The press worries about the Kardashians and other stupidities instead of reporting important news. Covering up their misdemeanors with fake stories about Donald Trump. The problem is the stories the Republican's have on the Clinton's are true, well documented and dealt with.

You people out there start to believe actions, not words.  Wake up. Stop taking the free grass in Los Angeles and smell and DRINK the coffee.
on October 14, 2016 No comments:

Dolce&Gabbana Women's Fall/Winter 2016-17, I shall find my prince wearing this.

LUCKILY I AM DEPLORABLE AND NOT COMPLIANT

In the leaks you discover that the campaign don't like Catholics they because they don't understand differences in gender. wow. They might be less promiscuous. To be a "Democrat"  used to mean you were a member of the unwashed and now means you are brainwashed, from your own party.
She said in 2015 we could see her emails? Now she changed her mind.
Hillary was advised not to be rude but she cannot help herself, she was advised to  not attack Bernie she looks bad and so on. They are worried about how the Liberal left feel rather than how they think.
They believed Trump would win. They said they would paint Trump as "reckless and crazy". Perhaps some of you will wake up? Sadly,  this time it is she who appears unfit to rule not the very popular Donald Trump. 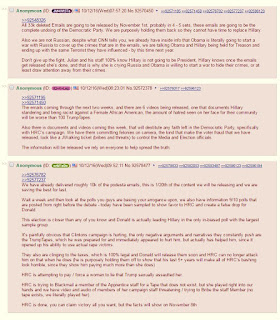 Everybody Lies For Hillary, Only Trump Tells The Truth - Hannity (FULL S...

In Trump We Trust | Ann Coulter and Stefan Molyneux

I awoke this morning to a whole lot of abuse on Facebook. Who cares? The problem with Democrats is that they have a "holier than thou" attitude which is enough to make you vomit if you wish to be a floating voter.  Everyone who commented has a worst past than Donald Trump if a neon light was shone upon it, so I wish they would for once shut up and listen and see what is really going on.
Of course,  this week is rough for Trump, his cat out of the box as he salaciously talks about slim women under 35 and pussy fumbling. Hardly the talk of Presidents, however, look at Kennedy he as an icon, and as a married man was hardly virtuous having an affair with someone as attractive as Marilyn Monroe. His past was full of mafia connections yet he tried to do good and in the process got killed. That is before emails and mobile telephones. There is nothing more dangerous as we all know than the last two for indiscretions. Hell to this, why are the mainstream media nagging him and ignoring Hillary. It was okay for American's to be killed in Benghazi and to use him as a punch bag.


" Political correctness is the worst thing for democracy" Gore Vidal. He could obviously see this coming.
A blog I love is one by Stanley Weiss.