OH NO NOT AGAIN

I am wondering if we will ever talk about anything other than Brexit ever again? I am passionate about politics but haven't we all had enough of our lying Parliament and its stupidity over dealing with it.  It is better to do a No deal and pocket the 40 billion. Please hurry because this is all costing a fortune, 500 million a week. They do not give a damn.

Last week was further proof that our democracy is cracked and sliding into yet more sludge. Mrs May's royal blue suit merged into Merkel's and left both with a halo of stars, proof of her intention to "Remain" in the EU. Mrs May is so disappointingly oleaginous, you do not know what to believe, I just listen to the actual words she says not the way she tells them. Listen to her last five words.  If she can, she will slide us back into the EU which will be more disastrous than the Remainers will admit. You see they want the exit to be as painful and as ugly as it can be. Nothing is worse than hearing my European friends who have been happy to live here as Non-Dom's saying how terrible it is. I am sorry filling out a form before entering The EU  is a whole lot better than joining the pound to the euro and paying for their bankrupt countries within the Union. 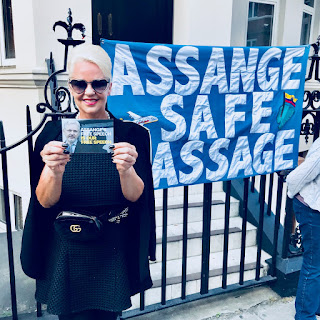 The "Remainers" sling words around which are particularly offensive calling anybody who is right wing and sensible, a "Nazis" or a member of the "Alt right." Labour  David Lammy should be careful accusing anyone, the team should sue for defamation of character. He is accusing people of the very thing that he is becoming. There is a significant problem in the Labour Party with antisemitism, bigotry and slander. General bad manners.

In America last week Candace Owens my favourite had to defend herself for mentioning "Hitler" at a TP USA convention when part of a speech was taken out of context.  My opinion is that Hitler was involved with the killing of 6 million people as was Stalin so they are abhorrent and it is better not to discuss. It is insulting to the families and friends of descendants.  Candace told her life candidly and fought back bravely, but in future, she will no doubt be careful and not dump herself into the Democrats slippery trap.

Julien Assange story is a diplomatic mess, I learnt a lot reading Wikileaks,  about Pizzagate and Spirit cooking dinners with Marina Abramovich and the Podesta Brother. However,  it does not seem reasonable that we know everything.  Is JA guilty? He indeed was good with a computer and let us know how corrupt governments were doing very possibly endangering people. Journalists must fight to have free speech, but there should be limits of intrusion,  let's not waste any money, let's send him back to Australia and therefore avoid dealing with the problem of America who will undoubtedly want to punish him. We do not want blood on our hands.  Ban him from Great Britain and move on, we have bigger fish to fry.
Trump has praised Wikileaks and then recently said it was not his thing, and he is right; it is Australia's problem. Also, get Chelsea Manning out of jail and ban her from computers too.

OPEN LETTER TO OUR MP's,.HOUSE OF COMMONS

Not very honourable Ladies and Gentlemen of the house.

What happened last week is the end of democracy as we know it. It was embarrassing and blatant theft, and you all chose to do this in Parliament and outside, with cameras on you. The Remainers are clearly behind it in government where they promised to support leaving the EU and then went against their word.

We are now defined by division, A Bexiter or a Remainer. This is not positive for friendship. I love Europe, but I do not want to be part of a power structure supporting impoverished countries when our industries are changing.  I do not wish to be a part of the Federal State of Europe. I do not need apples and carrots all the same size. We have totally different cultures. After all, we only need is a market union. Europe took away all Great Britain's manufacturing jobs at a time when everything is digitalised.  Then the huge immigration policy which was too much too fast without any consideration to the people who are living here. If I hear that immigration would happen anyway, or that we need them because we are getting older, I shall scream. I love different nationalities but I love my culture more and I wish to keep it too. This has become politically incorrect.
People of Great Britain need hope and prosperity, but the EU is out of touch and needs modernising within as you do in the House of Commons. We need empathy, and we need a polite way of speaking to each other that is calm and realises positive results that can be implemented.
It is totally unacceptable to show Brexiteers as educationally subnormal. If we are rude, The Remainers look like Geography Teachers and are puffed up with a whole lot of Non-Doms and people fleeing taxation from the rest of Europe.
The Leave march was calm and jolly considering the 'People's votes were actively sabotaged.
The way the British People have been treated is appallingly bad judgement and corrupt.
We want to leave without anything. 'Leave means to leave'. 650  disingenuous and disappointing
MP's we stupidly voted for against 17.4 million people who the Parliament chooses to think are dead? Those that voted to Remain 16.1 million, we did win. This would cost less to us the tax payer than the £55 million you are about to cost us  a week for delaying the exit. 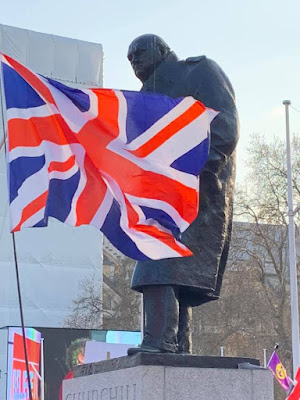 .
Our Prime Minister had private talks with Mr Corbyn proves our point.  If the person leading our country behaves like this and thinks it is alright heaven knows what example it gives to everybody else. This cannot continue. We all realise that the European Union is difficult to deal with. We know that.  Alice Weidel from the AfD is the only person there who speaks with clarity and is correct. She is considered too extreme for speaking the truth. The well funded and articulate Nigel Farage of the Brexit party was proven right. The Leaving side lost the vote by one in Parliament yet you have an MP', Fiona Onasanya with a criminal record voting in the House of Commons is not acceptable too, MP's should step down when this occurs. Parliament betrayed the will of the people by one vote. Of course, we are referred to by politicians, as the 'children'.

What is terrifying is that Brexiters are not allowed to say anything in the House of Commons or House of Lords and are not able to represent the people. They are shouted down, told to "Give way" Nigel Lawson at least stood up for what we believe in.

If there was an election today few of you would get in? Yvette Cooper is not to be trusted, and there are masses of footage of most MP's behaving with little integrity,  The screaming and shouting of the Speaker of the House, John Bercow is violently aggressive and is the cause of unrest.  He is also on the side of Remain. This, in turn, effects the markets where the pound is incredibly volatile and disturbs businesses so if this continues you will destroy us, and the economy, and the people of Great Britain. If this continues there will be a revolution, and you in Parliament will deserve it, and we will suffer it.

I, like everybody else in this country, is worried and ashamed by all of you.