EVERYTHING IS OKAY SOME THINGS ARE MORE OKAY THAN OTHERS

If British Vogue doesn't want segregation then why have they done this cover? Their objective is clearly misguided. Where are the redheads? There are redheads in caves of Tunisia?  Redheads are famous in Scotland, England and India. Where are the girls with blonde hair and blue eyes?  Where are the Jewish Girls? These girls look like they are waiting for a bus in Camden or in the Underground rather than looking like the new model line up, pretty girls for sure but nothing new.

The model is supposed to wear the fashion and not be the fashion. The Model is supposed to model the clothes so we can imagine us in them, it is not meant to be some political statement?. This is definitely newsworthy and political but is it going to shift merchandise and rejuvenate the flagging Vogue brand. There is after all nothing new about the Middle East buying couture, Harrods and Selfridges are full of the Middle East wearing designer clothes.  However, is this going to raise Vogue's stock market value? If we are going to be living in the modern world where are the muted genders? Why are we destroying our own culture it is not accurate.

I thought Vogue was a Fashion Magazine, a glossy fashion plate stimulating my credit card. Instead, they show a girl three stone overweight and the other girls look no better than the pretty girls at the makeup counter at Harrods. I thought Vogue was an aspirational magazine and I used to rush to buy it making sure that I was bang up to date? I used to look at the coats, the earrings, the skirt, the boots, now I have to look at girls saying look at me, acknowledge me? As a magazine and an avid fashionista, why would I copy these girls who have nothing to do with me. If I want to emulate any of these models, I can wait in line at the bus stop. We know the human being comes in all colours shapes and sizes. The fashionable woman is already switched on, and she does not need to be patronised. The demographics of England are slightly different than this implies, you cannot make an introduction by making an eradication. Do we all have to look like Green Peace lesbians? The clothes are ugly and uninviting. I was so looking forward to the new editor, and I am so underwhelmed and confused by the message and taste. Clearly, tits are out unless you are a lump of course. This new look may be a verbal statement, but it is not a visual one. When we are fed up with being invisible can we get some decent clothes out again? Clothes were meant to make ourselves look and feel better, more glamorous, and I would not want anything in Vogue at the moment and get into debt for what they are offering?  If they are going to do this to fashion, are they not murdering it? We buy clothes to make a statement, to make an entrance and to look good at work. To get a boyfriend, to get a lover, to attract a significant other. If there are no barriers why is there no man on the cover too?  In my opinion, this is just a watered down wishy-washy Benetton Advert, in fact, their adverts were much better than this they were original,  it's all been done before so "New Frontiers" looks out of date and politically correct without being appetising.  Can I remind everybody that burning bras just gave us a nation of sagging breasts? Iman and Naomi were so much more glamorous and interesting,  value for money, bring them back, what we need is aspiration, not drudgery, we want escapism, not political entrapment.  Australian Vogue got it right. 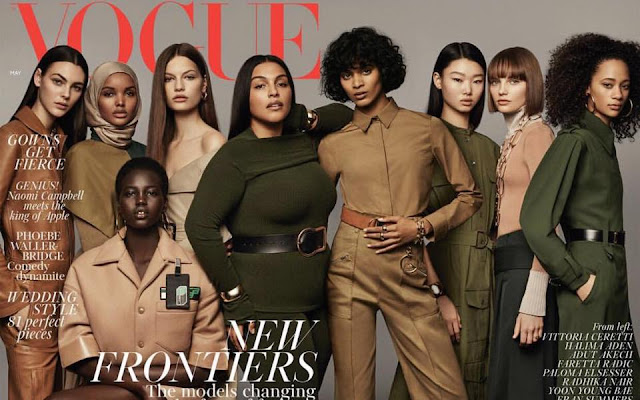 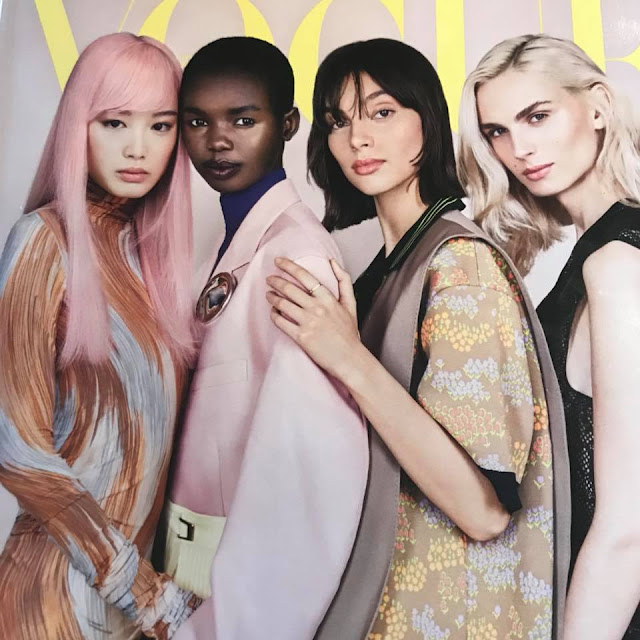 ENJOY EVERY MOMENT OF LIFE

Do we exist? Are we alive? Today I opened up The Times and there in the property section was my Mother, Caroline Brown, nee Gilliat's  house, Queen Anne Cottage, Hilcot  for sale for £695,000 in Wiltshire. It was the gardeners cottage and Mummy was there on sufferance, having had two children under the age of 23 with a writer and foreign correspondent, my Father,  Anthony Cave Brown,  to the disapproval of my Grandparents.   She then later moved to their house which was next door, that too has been sold.  I now see Mummy, Pumper and Squirrel  appear to be temporary ships that pass in the night. Proof their essence has nearly gone,  they all sadly died too soon, but I can see them and talk to them as if they were alive, at least I can be a part of their DNA and bacteria,  Deepak Chopra assures me.  It proves that I had better be on the journey I want to be on otherwise blink and I will miss it. Never go on someone else's journey. I wish I had ten minutes more with them to tell them I love them and I appreciate everything that they did for me. I have to have my own pathways, while my Family may be able to see me, they certainly can't help me or walk with me. When I was thirteen I was caught kissing a boy, and I got drunk, together with my best friend Charlie Jeffreys we were made to paint the kitchen in the house and I was not allowed out for the whole holiday. I decided on the colours orange and brown in defiance, and I went full swing into the early 1970's with a very thick paint brush. I never drank again and luckily I kissed many delicious boys.


Many years have passed as I looked at the grainy photographs and drawings and now Charlie has his own show in London, of course, a little risky. Murrays Club was full of erotic girls in skimpy clothes from another age. A hot sellout and I was only just able to buy a perfect witch in orange which I am delighted with, and she is blonde too. Snap.
I got there just in time as I had been in Mexico for Liberatum.  The magicians Pablo Ganguli and Tomas Auksas along with MAKKEN created an exceptional five days of culture, comradeship and creativity. Moments to remember were Maya Fiennes's inspirational Yoga class started off the whole event got everybody's spirits up,  followed by Deepak Chopra on the meaning of life with a film set to the Vivaldi Gloria. I met him with Belinda Carlisle, and he came to dinner twenty years ago, another moment another time, yet when I saw him, time did not exist.  I adored the feisty rock star from Garbage, redhead Shirley Manson, and I agree with her,  I too love the rain.
Mexico City was an exotic array of colours, blue,  shocking pink and I was in heaven as I entered the Frida Kahlo's house I could feel she had only just left, that is why I was touched by my Mother's house in Hilcot. My Mother had only just left.  Trotsky's house with whom Frida had had an affair with, looked as if he was still there, the birds in the garden, bullet holes in the wall and the natural dust of time.
Moving on composer Michael Nyman played with gusto on the steps outside to a crowd in the heat of the day and Oscar winner Natalia Lafoucade sang soulfully for us at night. Liberatum pulled many rabbits out of a hat, I had the best time with the hashtag me too gang and learnt a lot to further understand the meaning of life. I could not fail, who better to learn with than Alice Walker, Hillary Swank, Nan Goldin, Deepak Chopra and the crowd of inspirational people who gather at Liberatum's events.  It was not just the lectures but the friendship and laughter. Roseanne and photographer Dave Bennett, talking with Ali, a beautiful transgender model. On top of this St Regis hotel looked after us beautifully it was a welcome bonus. Enjoy everything you can because this minute as this second cannot last. Life is beautiful, hand in hand,  this is what makes life, comradeship and affection,  at least my memory cannot fail me, and I can touch a grainy photograph and love my friends in the present.