Less of the Hanging. McQueen and The woman in the tree.

Last night I arrived at St James's Theatre and had dinner with two of my most favourite friends Barrington and Ines De La Roche, from The Dark Theatre. Artists and raconteurs.

I was excited about seeing the Mcqueen play written by James Phillips and directed by John Caird.  I wanted, after having seen the Alexander McQueen show at The Victoria and Albert Museum, to be taken back to another time. I used to be allowed in by Snowden Hill one of the hairdressers behind the scenes, to see my favourite fashion fantasy of all times. In my opinion Alexander McQueen's was the only show that was not deadly dull. My son Charles went to work for Guido the hair stylist. My son was mad about Lee, and so he ticked off the models as they arrived, getting them coffee etc. Nothing of course could live up to my expectations, Lee is no longer with us.

I can say that whilst it was fabulous to watch the dancers beautiful choreography and the clever set pass by, there was so much more to the life of this extraordinary designer. How he worked? Where was the magic? The girl in the tree show was so much more, and so much less? Why people focus on the negative I never know? It is much more powerful than the positive, and so draining and heavy to watch. Of course, Lee committed suicide, but where was the humour? One thing I did realise was that it is certainly braver to live, after all many of us suffer depression.  My feeling is there is a problem with people when they make themselves too exclusive and don't interact with society. The actor Stephen Wight was excellent but you can only work with the lines and direction provided. and a tortured genius is not good entertainment. I was once told by Academy Award winning Sir Tim Rice some words of advice "Don't have anyone on stage alone for longer than 4 minutes as the audience begins to hate him/her" and a "musical about a person suffering anorexia is not good entertainment" 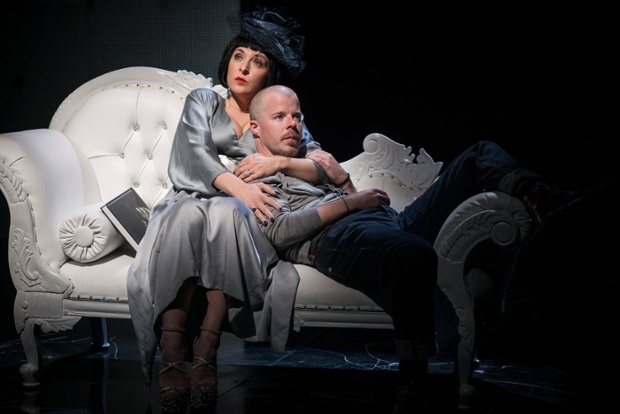 The could have been solved by Tracey Ann Oberman who played Issy Blow. Issy and I spent three Summers together in The South of France, she lived next door to me in Chester Square in Eaton Square. She was educated at Heathfield and was naturally grand. There is a certain stature that you have when you are educated privately that does not slip. She was witty, mean, depressed, silly, clever, gossipy, funny and very naughty. She was a camp show girl. The woman was acting her, but could not be her obviously. The actress sort of looked like her, but where was the lipstick on her teeth? The dirty hair? Where was the couture dress that was so filthy on the inside that it stood up on its own, Issy looked like a couture tramp.  I remember Issy once saying to my son, wear this new dress from Mcqueen, run round the garden in it, so it looks better, Charles did, trashing it with the label still in. She did not have psuedo French accent. Issy spoke with received pronunciation which Tracey should have easily been able to adopt having been educated at Central? So perhaps the script was wrong or perhaps the director?.
Issy correctly played would should have brought light relief to the dark spots.
She was not fake, yet so fake. She was naturally very generous, once in a home in Pimlico I visited her in, she was giving her black patent Fendi handbag away to a very pretty black girl. Her clothes too. My housekeeper refused to touch anything of hers, incase it was infested with germs. Issy had a touch of "Miss Haversham" about her. Her friends were Amanda Harlech and Lucy Birley, Tim Noble and Sue Webster, Phillip Treacy etc. She had the ability to be affectionate with a doorman. She was a huge snob and yet not a snob at all. Issy screamed at me once saying that I should not have a job as I was rich, I took the job away from someone who was not. She could be jealous, then loving. a character who could never have been forgotten. I have often said I would never have changed my looks unless she had not originally re styled me as Marilyn Monroe for a Tatler shoot putting me against a huge penis. I was horrified. She thought it was funny. She ran up huge bills, she was Madame Bovary, she was as witty as Mae West.

Nevertheless this one act play should be seen. I would love to re write it in some areas, It is so nearly very good. I would love to see a copy cat Phillip, Daphne, Seane, Annabelle, and less of the woman in the tree who is nonsense compared to the 'real life characters' that actually existed and still exist.
on June 09, 2015 No comments: