The Tiara Tantrums of Meghan Markle

A stiff upper lip and being stoic works. The House of Windsor is a life of duty in return for Titles and  comfort. It is not "okay" to complain on television, definitely not to your public. Meghan disappeared and ran to her holiday home in Canada causing a scandal, she could have faced the music in England and supported her husband?.  The British fought back and closed the door. Her erratic emotional behaviour and sadness in her African Documentary  looks like post natal depression.  The Monarchy live in an open prison, she needed to be prepared for that, but obviously thought it would be the same as living in Hollywood.
Her Majesty The Queen has had to cope with the scandals of  HRH Prince Andrew and her husband. One good thing is that Prince Andrew is off the topic of conversation.

I really liked Meghan  she was a breath of fresh air.  I love Prince Harry, we all do. I also liked her ideas that they should be financially independent through her website.  Meghan, I thought was stronger. She has talent, ambition and she speaks well.  Interested in liberal politics is incongruous with her luxurious lifestyle as politics is a complete no no in The Royal family. She also encouraged Harry to be healthy and give up his more outrageous friends. The bad side she appears to be a pushy diva who lacks a sense of humour.  We were told she was not a positive addition to The Royal Family. Meghan does not know how to behave.  Come on her need for press and her love of stealing attention is not really true, but because she has star quality her rags to riches life is  fabulous fodder for the press. She is the first woman of colour in the Royal Family which is refreshing and she has the look for of the Kardashian's which is so fashionable. The Californian Blonde is no longer and now the girls look as if they are from the make up counter at Harrods. Meghan is a very lucky LA girl who was in a soap and has got every girls dream and a very attractive Prince. The only other successful actress to become a Princess was Grace Kelly and Hitchcock is no longer alive and he liked blondes. 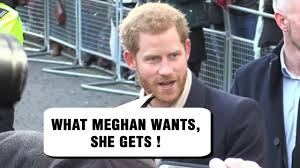 Meghan may seem full of hurt and contradiction but she is sincere. She hopefully will forgive her Father and her Sister. Her Father was clearly out of his depth. It is all too much drama.
Watch for a minute the sad  interview of her Father with a very kind Piers Morgan, I felt for him.  Making an enemy of the witty Piers was not great judgement.
Meghan get's distraught over comments about her holding a baby bump and a few avocados yet she bought her Father a suit and then did not let him wear it. Complaining about the toxic atmosphere she created is a bit judgemental and not elegant.
As a couple Harry and Meghan have flown in private jets, a gift from Elton John, stayed in multi-million pound houses and their lifestyle and security were paid for by us. Meghan has been married before yet her wedding cost the tax payer £35,000,000.
Meghan wore the dresses she wanted, she did not need food banks, she wore a tiara, was given a beautiful house, given a title, helped and loved by the British people. However, the British do not like the Nanny State and we do not like to be patronised.  If Megan continues with her plan we need to keep calm and let them go. If she does not like our country, there are plenty of beautiful girls in England waiting to help Harry get through this if she were to leave him.
Under this spotlight The Duchess of Cambridge has become a winner.

Meghan is also not the Duchess of Windsor either who had panache but was hated.  She apparently engaged in sexual techniques from Old Shanghai. 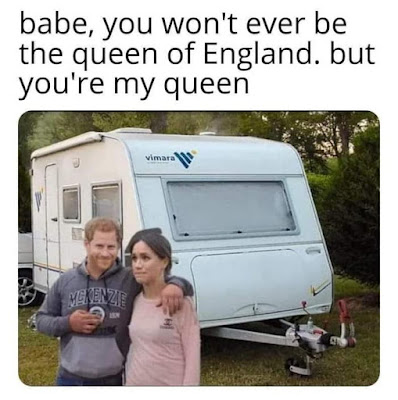 Harry's England is not as racist and poor as described by journalists and incensed women of colour on television. It is patriotic and it loves the Royal Family.
The British have great pride. The cult of misery guts which are against British humour and are woke are becoming tiresome. Develop a back bone, put up or get out. Life many in England we are all very disappointed and feel there is a lot more to this story than we will ever be told.

P.S
This endless talk of racism is not correct,  people should remember that William Wilberforce an English man stopped slavery in Slavery Abolition Act, (1833), in British history, act of Parliament that abolished slavery in most British colonies, freeing more than 800,000 enslaved Africans in the Caribbean and South Africa as well as a small number in Canada. It received Royal Assent on August 28, 1833, and took effect on August 1, 1834.

MEGXIT IS THE WAY TO GO. God save our Queen.

It's 2020, a new decade, it is time to move forward. Slim down the Royal Family. The Royal Family who are not immediately in line for the throne, should earn a living.  Had HRH Prince Andrew been allowed to do this properly he may not have compromised himself with Mr Epstein for money. He could have made enough himself.
It is always tricky for those who are in second line for the throne to have an occupation that does not damage the rest of the constitution.  To be an heir in waiting must be very stifling.

If Meghan and Harry are going to do this they however cannot expect the privileges that go with their change of plan, they could willingly drop the HRH to gain their privacy.  They may need some help initially but it is good to let go of the safety net. To be progressive in the Royal Family does not generally work. They need to be tactful and charming.  Of course people will be critical because change causes unrest, but Her Majesty should be pleased that these two wish to have real careers
It might have been a good idea to have run it past their family because their behaviour seemed irrational,  but this generation are brought up on Instagram and Facebook and their world is a digital bubble. Meghan is American. Their manners are not the same. I am sure they will have success. They should be aware that money and royalty do not look good together and so they cannot expect to receive both and Harry's duty is to respect the institution and what it means even if Meghan cannot. It brings him many opportunities and she was warned beforehand.

The good news is,  this will in turn, give a better life for HRH. William and Kate. They won't  be over shadowed by the glamorous "woke"  Sussex's.  They too are a modern couple full of hope and promise. I wish them luck. With distance and ambitions fulfilled,  all the families relationships with independent finances, will surely improve.

It is all a great pity we all loved Harry. Lucky Canada. 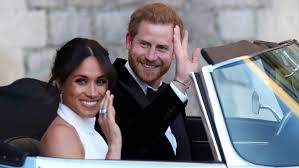 The Slim line Royal Family
the only ones that we need. 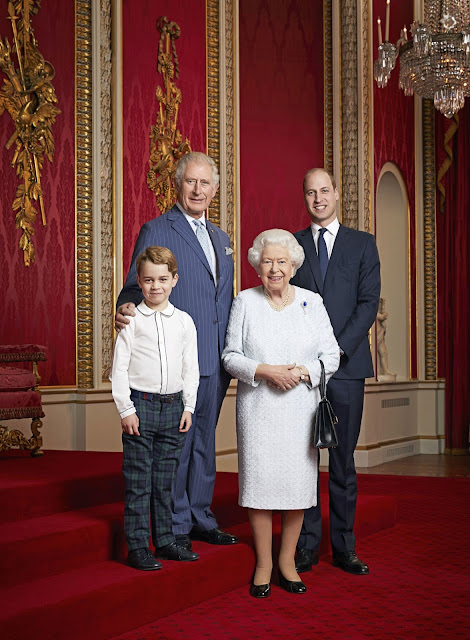 God save our gracious Queen.