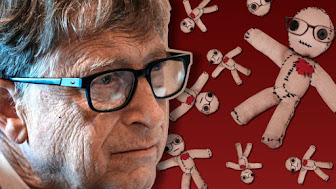 I don't know why all the Davos billionaires want The Reset as all this surveillance works against them too.  Obviously, Mrs Gates clicked into the track and trace app and did not like what she found.  The rich have to deal with their crazy wives and their wives have to deal with their husband's piggish behaviour.  Bill Gates now asks for privacy which he has taken away from all of us. What does he wish to hide? It is very suspicious as Gates and Fauci have spent two years dividing us with masks and social distancing and the distortion of science. We are accused of being racist and of not taking the world of COVID seriously enough.  Let's remember Gates has financed GAVI, Imperial College and Oxford University amongst many other ideas. What about the Lab in Wuhan, oh that is a conspiracy theory?.  They divide to rule.  In the meantime Gates has become more and more powerful.  After 27 years Mr and Mrs Gates are no longer compatible. Please think about who makes money from the vaccinations and PCR tests?. Two Billionaires for sale Bezos a warehouse goods distributor and Gates who is far too interested in medicine for the safety of the world.  I hope they did not shag the Nanny, so declasse!.  Neither, have sexy occupations but hey they have tons of cash which we women are supposedly attracted to?. Then Bill has bought vast amounts of farmland?  The billionaires have made yet more money from tax breaks hidden within their Foundations. Surely enough is enough?

On another note how can it be acceptable that platforms like Twitter can censor those people they do not agree with? The less we think the more we can be controlled.

My trip has ended. I had no idea where I was going and who  I would meet.  I just had to leave England and all the hysteria that I was becoming obsessed with down the rabbit hole. I was determined big pharma wanted to poison us and as yet I am still not convinced that their ideas are not nefarious.  I had the most incredibly positive trip but nothing has changed in the UK.  Let's see what the Dominion Servers bring as Kahn bought them for the elections. All went well except I was threatened by a semi attractive Avocado grower in Mexico with a hair transplant he wanted to put a friend of mine into a body bag. Luckily I was well protected.  Oh well back to the tranquillity of Chelsea Bridge.

Time will reveal all that has gone on, I am pretty sure there will be people up for war crimes in the future as everything unfolds.